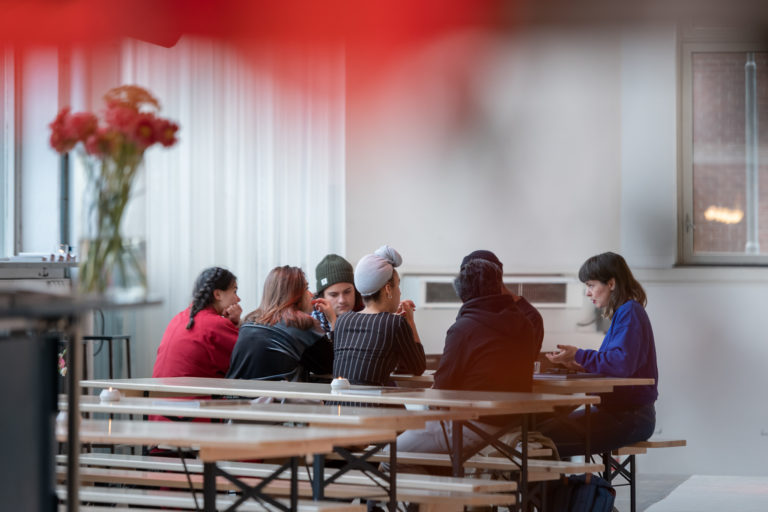 The seminar Thinking Alongside is linked to the conclusion of Ingri Fiksdal’s PhD Affective Choreographies. As part of the PhD work, Fiksdal has edited an anthology that includes texts by eight artists, curators and thinkers whose work in various ways are related to her own. These include Karmenlara Ely, Lauren Fournier, Daniel Blanga Gubbay, Satu Her-rala, Natasha Marie Llorens, Chrysa Parkinson, Mårten Spångberg and Ana Vujanovic. The idea behind the anthology is not for it to address Fiksdal’s work directly, but instead take up corresponding themes from other entry points. In this way, the collection of texts can contribute to a more multi-faceted knowledge production than what Fiksdal’s work would be capable of on its own.

The seminar emerges from three texts in the anthology: Ana Vujanovics Landscape dramaturgy: Space after perspective, Natasha Marie Llorens Useless Binaries, and Daniel Blanga Gubbays Talking about the Weather. Moderator is Camilla Eeg-Tverbakk. The seminar will be held in English. There will be short breaks announced by the seminar leader.

Natasha Marie Llorens is an independent curator and writer based in Marseille and New York. Her curatorial research is focused primarily on the relationship between violence and representation in contemporary art from a feminist perspective, and the ethical dimension of social practice in art. She has curated exhibitions at several galleries in New York, London and Marseille. Llorens writes about North African and Middle Eastern contemporary art and film, feminist politics, philosophies of violence, queer and intersectional politics in art, post-colonial and ethical curatorial practice. Her writing has appeared in different art magazines, among ArtReview and Art Agenda. She has taught at Columbia University, the Cooper Union and Eugene Lang College, both NYC, and is adjunct faculty in the Curatorial Studies MA program at Parsons in Paris. She is currently a PhD candidate in Modern and Contemporary Art History at Columbia University.

Ana Vujanović is a researcher, writer, dramaturge and lecturer, based in Berlin and Belgrade. Her work is focused on bringing together critical theory and contemporary art. She holds a Ph.D. in Humanities, Theatre Studies, and has lectured at various universities and educational programs throughout Europe, among the Performance Studies Dpt. of the University Hamburg and HZT Berlin. She is a team member and mentor at School for New Dance Development in Amsterdam. She collaborates on artworks in the fields of performance, theatre, dance and video/film, with artists such as Marta Popivoda, Eszter Salamon, Christine de Smedt and Dragana Bulut. She has published a number of articles in journals and collections and authored four books, most recently Public Sphere by Performance, with B. Cvejić. Currently she researches on transindividuality and landscape dramaturgy, edits the collection Live Gathering: Performance and Politics with L. A. Piazza, and works on the documentary Freedom Landscapes, directed by M. Popivoda.

Daniel Blanga Gubbay is a researcher in political philosophy and performance based in Brussels. After graduating in philosophy from the Venice University of Architecture with Giorgio Agamben, and while working with him, he got a European Ph.D. in Cultural Studies, jointly run by the University of Palermo, Valencia and Freie Unversität Berlin. He was the creator of the artistic project Pathosformel (2007-2014) and got a post-doc at the Heinrich Heine Universität in Düsseldorf, within a project on the use of the concept of possible in art and politics, recently presented in Beirut (AUB), Moscow (State University), and Tel Aviv (TAU). He currently teaches Political Philosophy for the Arts at the Académie des Beaux Arts in Brussels and he is the founder of Aleppo a space for researches in political philosophy in collaboration with art institutions. Gubbay was just appointed part of a new director-trio at Kunstnefestivaal des Arts in Brussels.

Dr. Camilla Eeg-Tverbakk is a freelance dramaturg and Professor in Dramaturgy and Performance. She has a PhD in Theatre & Performance from Roehampton University/ London, an MA in Performance Studies from New York University, an MA in Theatre Science from University of Oslo and has studied theatre practice at École Jacques Lecoq in Paris. She has a background as performer with independent companies in Norway, as well as from curating and extensive lecturing and teaching experience. Eeg-Tverbakk was the Artistic Director of the Acting Program at NTA between 2007-11. She has published articles in magazines and periodicals, edited the book Dans i samtiden (Spartacus 2006) on Norwegian contemporary dance, co-edited the book Performance Art by Baktruppen, First Part (Kontur 2009) and Responsive Listening, Theatre Training for Contemporary Spaces (Brooklyn Arts Press 2014).

Ingri Midgard Fiksdal is a choreographer based in Oslo. She is currently finishing her artistic research PhD Affective Choreography at the Oslo National Academy of the Arts. The focus of the research project is to explore choreography as affective through the development of specific choreographic principles. She aims to create work that produces potential for altered states, experiences, thoughts and ideas to occur. This is founded in a belief in art as a motor for change, through taking the role as “utterly useless” in a society where most other things have given and known purpose. When confronted with something that doesn´t perform as expected or resists classification we have to look for new approaches, and in these moments of liminality there is potential for the unpredictable and unforeseen to occur. Recent pieces include Diorama (2017), STATE (2016), Shadows of Tomorrow (2016) and Cosmic Body (2015). The work has toured extensively in Norway and Europe, as well as to the US and China. Deep Field (2018), which premieres at Black Box teater on the 7th of November, marks the end of the PhD.