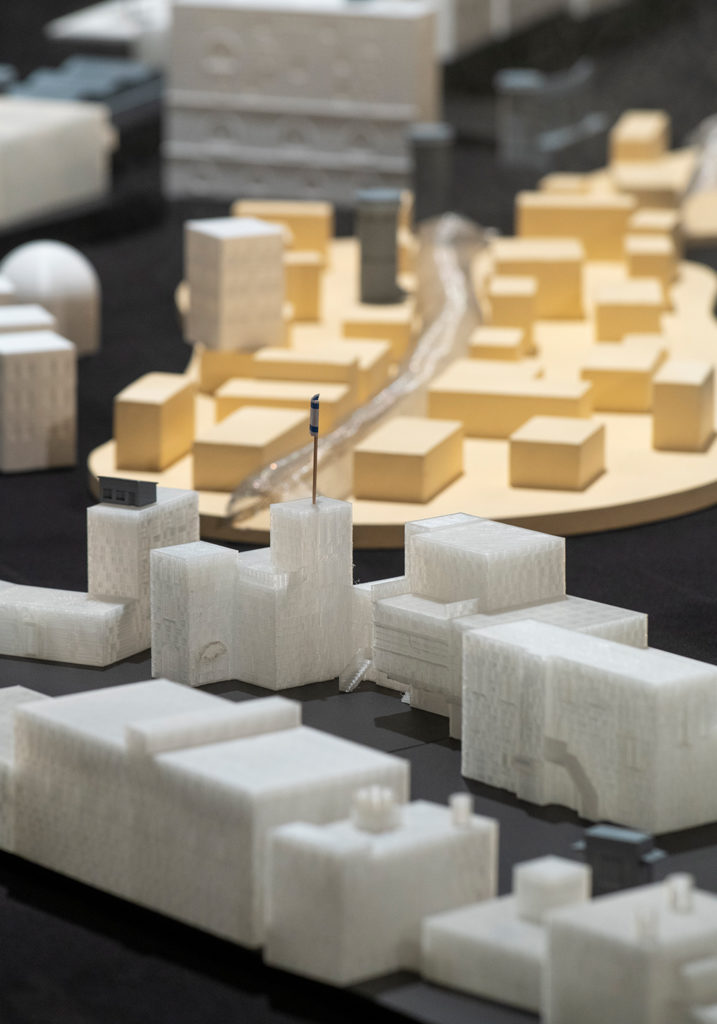 The Palestinian city of Hebron, under Israeli control, is divided into zones.

Shuhada Street, the central street of H2 Zone, is now “sterilized” according to the terminology used by the Israeli army, that is to say, emptied of its Palestinian inhabitants for “security reasons”. Today it is a ghost street, where destinies and narratives intersect, juxtaposes, observes and clashes in a dramatic and absurd microcosm.

Ruth Rosenthal and Xavier Klaine, from Winter Family, travelled to Hebron and collected 500 interviews each offering a different perspective of the conflict. Palestinians, settlers, soldiers, international activists told their particular story of Shuhada Street and shared their fears, hopes and despairs. In H2 – Hebron, Rosenthal, alone on stage, plays a tour guide in an exact replica of the H2 Zone. She is both the audiences’ guide and the city herself as she builds it up piece by piece, voicing the conflict from the perspectives of all protagonists and sharing the feeling of exhaustion generated by an unbearable but enduring occupation.

+ Seminar
Conflicts in art / Art and conflicts – debate
26. september 16.00-17.30. Fritt ord
Alongside the performance of H2-Hebron by Winter Family, we are hosting a seminar that will look at how art and artists investigate situations of conflict. How may their strategies challenge positions, perceptions and explore different ways of understanding? The debate will be in English.
The panel consists of the two artists from Winter Family, Ruth Rosenthal (IL/FR) and Xavier Klaine (FR), Wesam Alamdani (PS), author, and Anawana Haloba (ZM/NO), visual artist. The debate is moderated by Helle Siljeholm (NO), performing artist and curator.

Norwegian Helle Siljeholm has a Master in visual arts from KHiO and a bachelor in contemporary dance from London Contemporary Dance School. Her artistic practice includes choreography, performance, video, sculpture, installation as well as curating. Siljeholm has been working with different art projects in the Middle East since 2008. Together with choreographer Sara Christophersen she received Hans Christian Osterø´s memory award specifically focusing on their long term collaborative work for, and with dance in Palestine in partnership with the Sareeyyet Ramallah – First Ramallah Group.

Anawana Haloba is a Norwegian-Zambian visual artist who mainly works with film, video, sound, text and sculpture. She lives and works in Oslo. Haloba´s work addresses issues of globalization, traumatic experiences from war-affected areas, social and economic exploitation, positions of power and psychology. Haloba is a graduate of the Rijksakademie van Beeldende Kunsten in Amsterdam, the Netherlands, the Academy of Fine Arts in Oslo and Evelyn Hone College of Applied Arts and Commerce, Lusaka, Zambia.

Wesam Almadani is a Palestinian writer born in Sudan. She lived in Egypt before moving to Gaza after the Oslo agreement. Almadani has a diploma in drama and theatre, and writes poems and short stories. In Gaza she held drama- and writers workshops as well as making theatre pieces with and for kids and youths. She now lives in Larvik, and is the city’s first Friby author and ICORN writer.

Ruth Rosenthal is an Israeli artist graduated from the Visual Theater School of Jerusalem. She now lives and works in Paris where she is a member of the artist duo Winter Family. Rosentahl has created and participated as a performer and light designer in various pieces, installations and performances in Israel and Europe. She worked for several years at the Tel Aviv Opera House. In 2004, she founded in Jaffa Winter Family with Xavier Klaine.

Xavier Klaine is a French musician with a background as both bassist of several hardcore bands and the winner of gold medal of piano and chamber music at the National Conservatory of the Nancy Region. He then pursues a third cycle of Political and Cultural Geography at the University of Paris IV-La Sorbonne and specializes in the study of the Kazakh diaspora. In 2001, he decided to devote himself to musical creation. In 2004 he founded Winter Family with Ruth Rosenthal.

Winter Family is based in Paris and consists of composer and theatre duo Ruth Rosenthal from Israel and Xavier Klaine from France. H2 – Hebron is their third documentary performance.