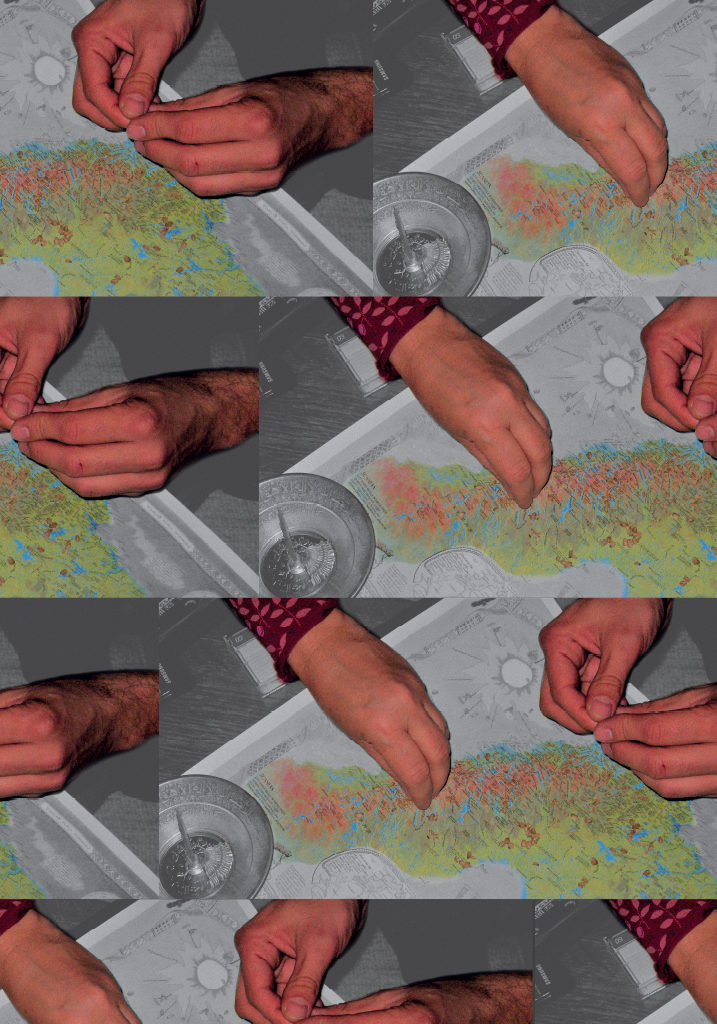 For the past two years, in the rural North of Norway, Habib and Hindi have performed in people’s houses in exchange for a dinner or a coffee.
The work has been developed in the spirit of hosting strangers with strangeness, where art is stuck inside reality. Habib and Hindi use found objects, lo-fi recordings, fantastique-realist poems and their own bodies. Stranger Within is a collective endeavor, and for each edition they invite guest artists they have met along the road in the North. The guests add their own perspective to what absence and strangeness feels like. Each session will have one guest, whether a Sami rapper, a lecture about an isolated island, a work on sacred natural places or a piece of mythical storytelling.

About the work: That which roams unseen and quiet upon the land signals that what is not here is moving us. Stranger Within is a haunted landscape, maintaining a multiplicity of absences: historical and ecosystemic. The work is at a muddy crossroad, between performance and politics. Presences that seem to have disappeared reappear, and start to behave strangely: breaking objects, shaking bodies, shaping menacing figures.

It is a tale set in the rural north of Norway, exploring the fabric of what makes a political unconscious. This broken history of Norway is shaped like a haunted land, fretting at the remains of the day. Strange agents made out of driftwood, plastic and flesh are disseminated, lurking. Ubiquitous and shapeshifting, they betray their own intentions. Stranger Within is the work of a sleeper: the story unfolds using displacement, condensation and disruption.

Guest: Sina Seifee
Sina Seifee joined as guest artist when Habib and Hindi traveled in their caravan around Alta and Kautokeino. He is now invited back as guest artist during Stranger Within at IKM. In his artistic output Sina Seifee is a storyteller that explores narrative fields and knowledge production. He is based in Brussels, with a background from Tehran.

Concert with SlinCraze
Saturday October 13th at 20.30. Free entrance.
Hindi and Habib met Nils-Rune Utsi, aka. SlinCraze on their travels around Alta and Kautokeino in 2017, sharing good conversations, music and vodka. SlinCraze is a Sami rapper from Mazé, outside of Kautokeino in Finnmark. SlinCraze is one of the main voices of the young generation Sámi artists, having worked with music and hip hop for over 10 years. He started with music and rap in 2004, 14 years old. Since then, he has been the youngest artist to play at by:Larm, played for King Harald, received the RAMP-scholarship, been awarded Sami artist of the year by Sápmi Music and Scene Finnmark, been part of the theme song for the Norwegian TV-series “Hjerterått” and been the first artist ever to have played a hiphop concert in the UN-building in New York. He has won Heddaprisen and Kritikerprisen for his participation in the performance “Vidas Extremas”, produced by the Sami National Theatre – Beaivváš Sámi Našunálateahter.
SlinCraze uses his music as a way to preserve the Sami tradition and regards his rap as a way of saving a nearly extinct language:
“It’s important for me to tell them to not be ashamed of their culture. I think my main goal is to make people proud to be a native” (Nils Rune Utsi, United Nations Permanent Forum on Indigenous Issues, New York 2015)

Traces of a stone by LATERNA // Inger-Reidun Olsen & Marianne Skjeldal
Sunday October 14th at 19.00
Hindi and Habib have invited the artist duo LATERNA to share from their project and practice which has many common points with Stranger Within. “The landscape. I am a guest, a stranger, in this landscape. It is barren, cold, misty and sometimes very sunny and bright, on the edge of turning into spring, but still lingering in cold humidity. The stone. How to befriend the stone? It is the stone which gives me a feeling of coming home in this landscape. The stone is the centre point of my attention, and from this centre point I will open up more to the environment.” Robert Steijn
In June 2017 LATERNA created a performance in collaboration with LOCUS, Robert Steijn and Kvalsund Kommune / Stallodagene. For days, five artists sat together with an ancient stone, Áhkánjárstábba, known as the Stallo in Kvalsund, a bauta-like stone that was a Sami sacrificial place in pre-Christian times. They talked and sang for it. They slept, dreamt and had conversations beside it. On the day of summer solstice, they celebrated the stone together with people from the local community and visitors from afar. In this performance, the stone and the place itself became the point of departure – A portal into learning more about the local history, the people and their stories. During Stranger Within at the IKM gallery, LATERNA re-visits memories and traces of their meeting with the renowned Áhkánjárstábba. They research new ways of befriending stones, searching for ways to involve the audience. The artists invite the audience to meet with the stone and other stone bodies – inside the gallery space.
LATERNA consists of Inger-Reidun Olsen and Marianne Skjeldal, both choreographers and performers, coming from a dance background. LATERNA works with performance in various formats, with geographical places, materials, objects, sound and actions connected to their overall artistic research, performative and spiritual practices. LATERNA was established in 2011, as a nomadic porous unit, based in Oslo, Norway.

Lecture and projection by photographer Ingun Alette Mæhlum
Thursday October 18th at 17.30. Free entrance.
Ingun Alette Mæhlum joined Hindi and Habib as a photographer on their travels in and around Tromsø in spring 2017. She became a good friend of the project and provided an entry point into the local landscape of Tromsø. Only seven people inhabit the island of Tussøy in Troms in Arctic Norway. There have lived people on the island since early Iron Age, and the number of people peaked around 1950 with sixty inhabitants. In the following decades, most of the rural areas along the coast experienced a large depopulation. Mæhlum will give us a lecture on her encounters there, and show us her photographic work. Ingun Alette Mæhlum is a documentary photographer based in Tromsø. She does most of her work above the Arctic circle, and luckily, she loves working in rough weather. As well as working on her own documentary projects, she takes on various assignments for magazines and newspapers. She has received several national prizes for her photographs, and got a documentary prize in 2015 for the photo book Tussøy.

Mia Habib and Jassem Hindi have collaborated on multidisciplinary works since 2007, notably under the name We Insist, with Rani Nair. They have been presented in the Nordic countries, Syria, Morocco, and Mexico, amongst others.
Mia Habib is a performer and choreographer working at the intersection of performance, exhibition, publications, lectures, teaching, mentoring and curating. Jassem Hindi is a performer and sound artist. His most recent work Laundry of Legends was produced and presented at HAU (Berlin) earlier this year.